The story begins with a boy named Collins...

Collins was a bright little 11 year old who loved to run. Ever since he was little he'd dreamed of exploring the universe. Secretly in his bedroom, he was constructing a spaceship. He called it: Walkr!

There was only one problem. Where was anyone supposed to find the energy to power a ship like that?

It wasn't long before he came up with a clever solution. He remodeled his father's treadmill to convert energy for the ship. "This way all you have to do is walk, and the steps will be converted into energy to fuel the ship!" Collins thought with a smile.

Later, on the day of his graduation ceremony, Collins rushed home. It was time to power up Walkr. He and his Shiba Inu, Doggii, bid their home farewell and set off together for the farthest reaches of space...

"Walkr come in, Walkr come in: Captain Collins, Commander Doggii, Walkr is about to leave Earth's atmosphere and enter... the universe!" *crackle* *crackle*
The noise at the end of the transmission disappeared into nothing but silence with the sound of Collins' and Doggii's beating hearts.

//
As the spaceship blasted into the galaxy, Collins noticed an adorable planet he'd never seen before!

"There's got to be more of these little planets nearby!" he thought.

With that, he released the Walkr Explorer to probe the nearby regions of space and see what other exciting things could be discovered. 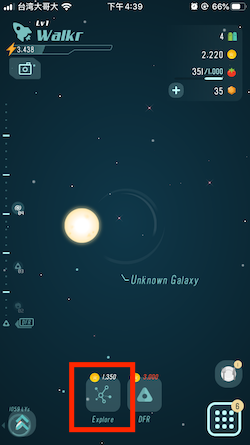 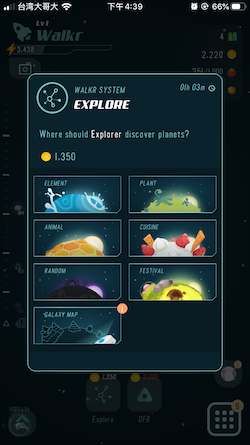 He suddenly noticed a mysterious shadow off in the distance! But the Explorer was flying far too slowly, it would be 1 hours before it reached the nearest planet. Collins decided it was best to use energy to speed up Explorer's discovery. 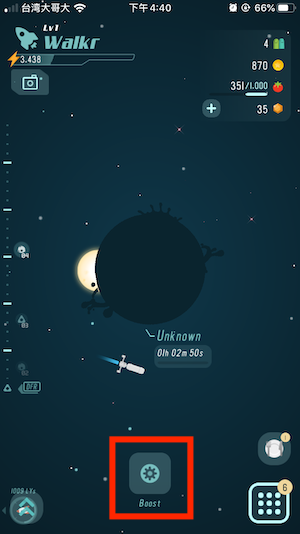 But he didn't have enough. He needed more energy if he wanted to discover the nearest planet right away. Collins jumped on the treadmill and ran as fast as he could, converting his steps into energy. (It's worth mentioning, at one point he realized that despite all his efforts, Walkr wasn't recording any of his steps! Thankfully he found the Navigation Handbook: How to ensure Walkr tracks your steps - iOS / Android). 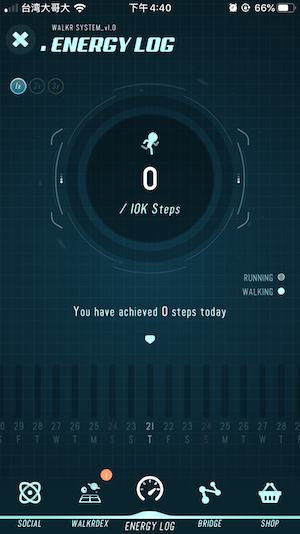 //
Finally! A new planet had been discovered!

Doggii quickly realized: "It seems when a planet's inhabitants are fed, they produce the coins for us!" (Doggii's a smart little pup, you know -- his IQ is over 180!)

"But where are we going to get food? How are we supposed to feed all these planets?" asked Collins.

"You just built that DFR. We can use it to make food, all we have to do is tap it!" Doggii pointed at the DFR (Dynamic Food Replicator) outside the ship. 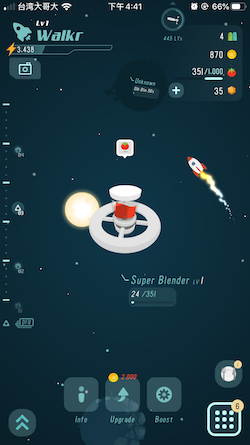 "Then we just tap the Feed button underneath the planet to feed them!" Doggii happily added. 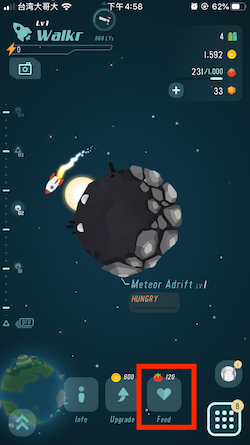 After feeding the creatures, the planet really did begin to produce the coins! Tapping the planet allows you collect them! 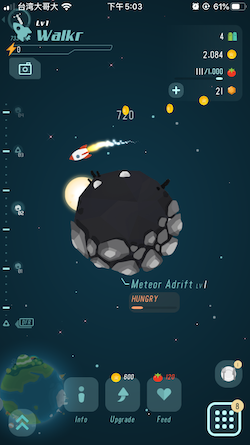 //
Collins couldn't wait to explore the next planet. He just so happened to be able to use the coins he'd collected to send off Explorer on another discovery mission! He began to realize, as a planet's level increases, the amount of time they can spend producing coins also increases. So, he decided it was time he upgrade his planet.

As the number of planets he'd discovered continued to increase, he continued to upgrade their levels, only to find that the population he'd become responsible for had grown, too! There was no way he had enough food for everyone! Collins wanted to build even more DFRs, but he couldn't. It turns out his spaceship's level wasn't high enough. After upgrading his spaceship, he was able to build more DFRs!

Collins and Doggii continued to work closely together. Along their galaxy adventures they continued to discover planet after planet. But wait just a second, isn't the Walkr spaceship now in your hands?!

Maybe now you've realized, it turns out the little one dreaming of space has been you all along!

"You've already got the basics down, Captain!" says Doggii, looking at you excitedly.

It's time for you to continue exploring, discover more planets and develop your very own universe!

＊After you've discovered 10 planets, you'll be able to make use of even more equipment. For now, let's leave this to another time. You can always come back and learn more. The Navigation Handbook can be found any time by going to Walkr > Menu > Settings > Player Support > "New Captain Navigation Handbook"
Murmurs from the Walkr system: "Captain, have your questions all been answered..?" Has this FAQ helped? If so, please tap "Yes" below.
If not, "tap here" to let us know. Your feedback will help us improve the app's FAQ!